An attendant to the princess of Moloka’i rides in the King Kamehameha Day parade in Kailua-Kona on the Big Island of Hawaii wearing a traditional pāʻū dress. She and her horse are both adorned with the lei for the island of Moloka’i.

Rather than ride “properly” sidesaddle, Hawaiian women instead made extra long dresses called pāʻū and rode astride, as men did. It is said that pāʻū riders would gallup quickly up to parties, laughing and having fun, denoting a combination of the western culture and their own.

The King Kamehameha Day parade in Kona is held each year on the Saturday following the actual holiday. Hundreds ride in the parade representing each of the islands, several local Hawaiian organizations, and even the royal orders established by King Kamehameha V.

The riders decorate their horses and themselves with lei unique to each island, spending many hours gathering the right leaves and flowers and many more hours making the large lei.

Every May 1st since 1927, Hawaii has celebrated “Lei Day”, a holiday unique to the islands and filled with lei making, contests, hula dancing, and the annual crowing of the Lei Queen and her court. END_OF_DOCUMENT_TOKEN_TO_BE_REPLACED 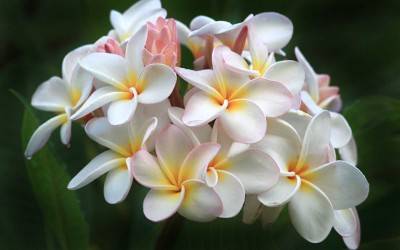 In Hawaiian, the plumeria is called, “melia.” These soft, abundantly fragrant flowers have become a hallmark of Hawaii. Sitting in tight, beautiful bunches atop small trees, plumeria beckon to be seen, smelled, and plucked from their branches to enjoy throughout the day. END_OF_DOCUMENT_TOKEN_TO_BE_REPLACED 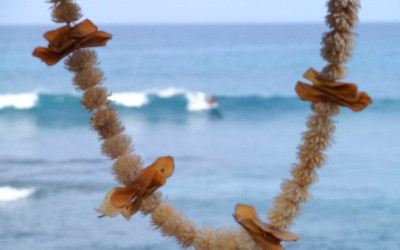 A white flower lei hangs from a branch overlooking a surf spot near Kailua-Kona on Hawaii’s Big Island as a surfer catches a wave in the background. END_OF_DOCUMENT_TOKEN_TO_BE_REPLACED