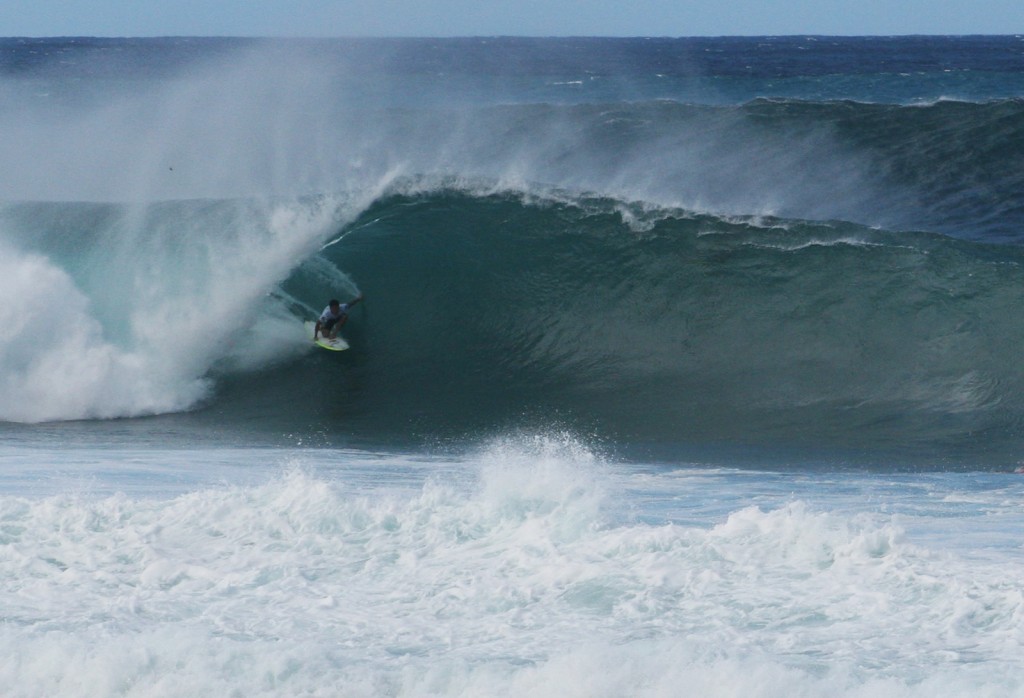 The Bonzai Pipeline is well known among surfers and surf fans worldwide. Located on Oahu’s North Shore, Pipeline’s unique underwater reef structure and shoreline position cause incoming waves to roll over themselves creating a barrel, or pipe, inside the wave.

Expert surfers and locals cautiously make their way out to the Bonzai Pipeline paddling on the riptide created by the massive amount of water flowing back from the beach where it is deposited en masse after a 2,000 mile journey across the Pacific ocean.

This picture shows a professional surfer on the first day of the Billabong Pipe Masters competition 2011, the last stop of Van’s Triple Crown of Surfing and the Van’s World Cup of Surfing. The waves were coming in at 10-12 feet, creating wave faces more than 2-stories high. Surfers paddle into the waves, dropping straight down the face, making a hard turn at the bottom, and taking as fine a line as possible to ride inside the barrel for as long as possible–no easy feat.

This day, the waves were big enough to break at not only the nearest to shore reef, but also at the second reef out. Clean, offshore breezes stacked the waves up, adding to their form and challenge. Swells coming from more than one direction made for even more challenging conditions as competitors waited, watched, and braved themselves down massive faces.

As an add on to this picture, here’s a short film shot on the North Shore with a fair amount of Pipeline footage.