Nestled into a north Maui valley, this red-roof church stands out from its surroundings. The church has served its small town for many years.

Christianity was brought Hawaii when the first missionaries arrived in 1819 about a year after the first king of the unified islands, King Kemehameha the Great, died. When King Kamehameha’s son Liholiho took reign he abolished Kapu, which was the set of rules and spirituality that the people followed until then. This meant that the missionaries arrived at a time when the old religion was in turmoil.

King Liholiho allowed the missionaries to come ashore in Kailua-Kona on the Big Island. Further, he let them stay as long as one was assigned to Kailua and one was assigned to Honolulu. Initially, the agreed time-frame of their stay was one year. This was later extended indefinitely. Since then, churches like this one have been built on the islands to serve their local communities with the blessing of locals. 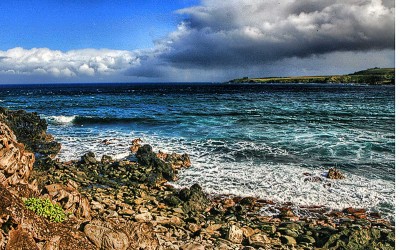 The Kapalua shoreline on Maui boasts impressive views and varied geology, both coming into play in this great photo. END_OF_DOCUMENT_TOKEN_TO_BE_REPLACED