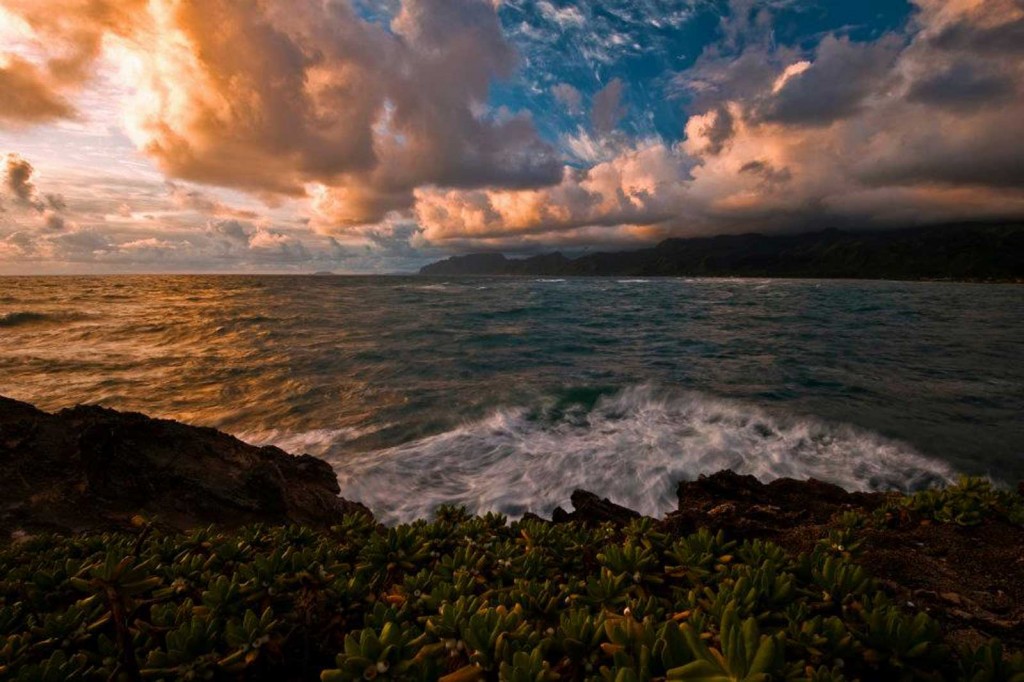 Sunrise greets La’ie Point with a brilliant burst colors on Oahu’s windward side. From La’ie Point you can explore sweeping views of the coastline and several small near-shore islands.

The blue sky seems to be split in two by the yellow sun, while rays illuminate the green naupaka shrub in the foreground.

The Legend of La’ie Point:

Legend has it that parts of La’ie Point used to be a giant lizard–“mo’o” in the Hawaiian language.

“After Kana (a legendary warrior) and his brother had rescued their mother from Moloka’i and had taken her back to Hawaii, Kana set out on a journey to kill all the Mo’o in the islands. In time, he arrived in La’ie where the Mo’o had been killing many people. Kana easily defeated the Mo’o taking its head. He chopped it into five pieces and flung them into the ocean. The pieces of the lizard’s head can still be seen today as five small islands lying off-shore their original names were Kihewamoku, Moluaaniwa, Pulemoku, Malualai and Keauakaluapa’a’a.” – Source: Hawaiian Legends by William Rice, Bishop Museum Bulletin, Honolulu, HI 1923.

Photographer Note: The aperture was f22, and exposure was 1/2 second. No nd filter used.